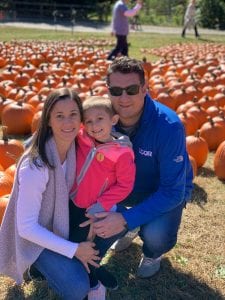 On January 23 , 2019 after months of unexplained ailments and pain, we received the devastating news from our Yale Pediatric Team that our 3 1/2 year old daughter, Kaia Elizabeth had been diagnosed with stage 4 Neuroblastoma.

Neuroblastoma is an aggressive form of pediatric cancer of the Central Nervous System; it begins as a tumor growth from the adrenal gland, and if not discovered, spreads into the bone marrow, and further into the actual bone itself giving it the staging level of 4. An even further shock was hearing that only 600 cases are diagnosed in all of the USA each year. Our entire world was rocked but not shattered, this family has battled cancer once before and destroyed it.

In order to prepare for battle once again, we immediately contacted Dr. Brian Kushner, Pediatric Oncologist with Memorial Sloan Kettering Cancer Center (MSKCC), as they have been revered as one of the most experienced Pediatric Teams for Neuroblastoma in the world. Dr. Kushner advised us that we needed to get our Kaia to a pediatric hospital immediately to begin chemotherapy – and so, the following day our journey to fight this disease began.

Kaia started her front-line chemotherapy treatments with the amazing Yale New Haven Team, but this was just the start. On April 22nd,
Kaia had an 8 hour re-section surgery with Dr. Michael La Quaglia, Pediatric Surgeon at Memorial Sloan Kettering, to remove the softball sized tumor resting on her adrenal gland. Dr. La Quaglia is sought after by families across the world to perform this highly complex surgery.

After a challenging recovery from surgery, Kaia completed her front-line chemo treatment at Yale, and we were now faced with next step decisions. After many, many sleepless nights and hours upon hours of research, we made the decision to transfer Kaia’s care to MSKCC. Here she received additional chemo treatment paired with 5 days of heavy radiation administered two times a day. MSKCC’s next step was to begin 7 sessions of three day rounds of a painful, but highly effective immunotherapy designated as HU3F8. The HU3F8 treatment was designed by MSKCC physicians and funded by a group of parents (Band of Parents Foundation) who were also devastated by this very same diagnosis. We are grateful beyond words for the strides made in the last few years to fight/cure neuroblastoma, but the battle is not over. There are additional critical studies and treatments so close to being available – but can only come to fruition with the help of funding.

We are grateful to share the news that Kaia currently has no evidence of active disease – this is the news EVERY parent in our situation wants to hear and continue to hear for the rest of her life. When Kaia first became ill, she was in so much pain that she could hardly walk, let alone dance, which is her favorite thing in the world. After the diagnosis, we were determined to not only move mountains for our child, but to get her up and see her dance again. NO child should EVER feel so ill that they can’t enjoy life and participate in the simple things they love. For this very reason WE have decided to join the fight and do everything we possibly can to work with MSKCC to help fund medical advances for Neuroblastoma in an effort to ensure every child can live without pain and continue to dance.